Are you thinking about buying a helicopter? Selling one? Funding a purchase or lease? As in economics, there are both micro and macro elements critical to its value.

Let's define micro elements as those which are inherent in the helicopter itself. These are the things that a buyer looks for: the status of the components as a percentage used, the existence of power-by-the-hour contracts on the engine(s) or drivetrain, the configuration and installed equipment, the avionics, the country of registry, and the quality of the operator who has been using it.

Arguably the most famous definition of a helicopter is "an assembly of forty thousand loose pieces, flying more or less in formation." Given a specific helicopter, the most important micro element of value is the components' Time Since Overhaul (TSO) or Time Since New (TSN). This includes the dynamic components such as engines, transmissions, swashplate, main- and tail-rotor blades, drive shafts, and flight controls; and we'll throw in the major airframe inspection as well. "TSO" is used for components which must be periodically overhauled and then returned to service. "TSN" is used for components which must be removed and replaced with new or serviceable components at specific intervals. The second are often called "life-limited" components and the first "rotables." 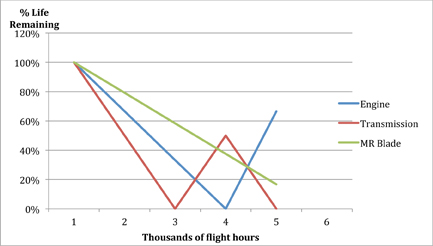 As you can see from the chart above, not every component depreciates over the same amount of flight time. A series of formals is used to determine the average of all the components' percentages used at any point during its life, allowing the helicopter to be accurately measured against comparable sales, offerings, and pending contracts.

Component times are determined by examining the helicopter's flight and maintenance logbooks. The logbooks record every minute of flight time, every component change, every overhaul and inspection related to that particular airframe or engine. Additionally, every serial-numbered component has a hard card (the flight and maintenance records for each individual component) that follows it throughout its life, from birth to death, regardless of what helicopter the component is installed in at any given moment. Components move frequently from inventory to airframe, and from one airframe to another. It's faster to remove a component and replace it with a fresh one than to take a helicopter out of service while waiting weeks for an inspection or overhaul. This is as true of a small component such as a hydraulic servo as it is of a large one such as an engine. With so many component changes occurring at any time during a helicopter's operation, individual records are required for every component as well as for the helicopter itself. (These required records are absolutely critical to the operation of a helicopter and its resale value. Any FAA inspector can shut down the helicopter at any time if he requests a record that does not exist or is inaccurate. Questionable records could do more than shut down the helicopter, they could shut down an entire operation. Clean, detailed, accurate records are a point in favor of a helicopter at its time of resale, regardless of your role as buyer, seller, or financier.)

A Power by the Hour (PBH) contract is essentially a prepaid maintenance agreement in which the operator sends the manufacturer a fixed hourly payment and the manufacturer provides a freshly overhauled replacement part for every component under the contract term that comes to its life limit (or fails). The PBH-covered parts and components are therefore considered to always be guaranteed to be either actually in, or to be qualified for restoration to, a "zero" or "low" time service life condition. They each retain a high dollar value, regardless of their actual service life status, by virtue of remaining in "like new" condition as a result of the paid-up PBH program. Because PBH includes scheduled maintenance, it is far more than an insurance contract, and carries far more weight when valuing the helicopter.

Installed equipment and avionics values are unique to each helicopter. Those items that translate well across multiple usages like air ambulance, offshore oil support, and personal use, or those that improve the performance of the helicopter, are those that supplement the helicopter's value the most. Three examples: 1) the Carson Helicopters composite main rotor blades for the Sikorsky S-61 can increase the value of the helicopter by more than the cost of the blades. 2) The Garmin 430 GPS is the most popular navigation aid in a helicopter's cockpit across all models and all usages, and correspondingly adds more value than smaller or less popular models, and an equal amount to larger, more expensive units. 3) A Restricted Category certificate of registration will reduce the value of the helicopter except in very specialized models and usages.

A financier will want to know the country in which the operator will be operating. Some countries carry inherently higher risk, such as those which have been known to exercise eminent domain under questionable circumstances on assets with liens perfected by someone else. Higher risk causes the financier to charge accordingly higher rates. Countries which are signatories to the Cape Town Convention (properly known as The Convention on International Interests in Mobile Equipment and Aircraft Protocol) offer the lender better remedies for default conditions, among other improvements in perfecting their interests.

Buyers and financiers alike want to know the quality of the previous operator before investing in a helicopter. Their predominant interest obviously lies in the maintenance of the helicopter, since that directly impacts the helicopter's value in terms of the status of the components' TSOs and TSNs. Because of the chain of liability, buyers and sellers will also want to know whether there are any pending or contingent charges, liens, or litigation against the previous owner and/or operator.