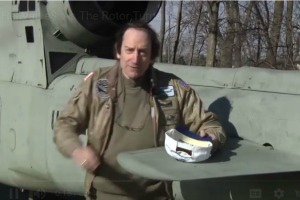 “Don’t Look Back; the future may be gaining on you”

Everyone with any experience in the helicopter industry knows how and why helicopters are different from fixed-wing airplanes. Helicopter people also know that these differences are a “good thing”. The helicopters’ uniqueness is an irreplaceable asset - until the times comes to explain it to important people.

Some of the “important people” in the life of helicopter people are:

Financiers: Most directly the lenders and lessors;

Insurers: Primarily the agent/brokers, and the companies they sell for and represent, and, probably most important, the insurance underwriters who really determine coverage and rates;

National regulators: Who can either encourage the development of local helicopter operations, or, they can make sure that local helicopters (word play intended) “never get off the ground”.

often telling the world what helicopters are NOT.  Helicopter people know that the helicopter is

not a car or a bus, they are not trucks nor are they trains, and finally: (this is where we really lose them) helicopters are not airplanes. In fact, most of the economic and mechanical facts that the important (fixed-wing) people know about airplanes is directly opposite with helicopters!

in/through the air. This is true, despite the popular conception that helicopters have to spend

most of their flight-time simply beating the air into submission! But the real way helicopters

ARE like their fixed-wing relatives, is how much some new helicopters are becoming more and more like airplanes.

Helicopters are getting bigger, faster, and, more economical on a cost-per-hour operating expense viewpoint. Cases in point: The Bell-Boeing V-22 “Osprey” tilt-rotor transport currently on active duty with the U.S. Marine Corps is paving the way for fast, safe and dependable “Vertical Replenishment” of troops and materiel under some of the most complex and inhospitable conditions. The “Son of Osprey”, the Agusta Westland AW609, (also a tilt-rotor) scheduled to finally enter commercial service reasonably soon, will look like and act like a modern “light-twin” business-class turboprop. Except that it can carry an oilfield drilling crew to the rig 100+ miles out at sea in airliner comfort and speed, yet descend vertically onto the rig’s small space of the existing helideck with no “runway” or flight deck needed.

Just to add to the equation, Eurocopter is currently giving demonstration tours of its X3 compound helicopter. The X-3 is unique in that it has a standard main-rotor assembly, but no tail-rotor/fenestron. Instead, the X-3 has a “wing” on either side of the fuselage which holds the forward-facing (only) engines and propellers, so “voila”: instant turbo-prop speeds and economy of operation once it’s away from the take-off or landing area.

With the hugely increased capabilities, flexibility, reliability, and maintainability of these newest helicopters, fixed-wing manufactures may not want to look over their shoulder: They’ll probably see what’s rapidly about to overtake them.